My New Book – Presidential Friendships: How They Changed History 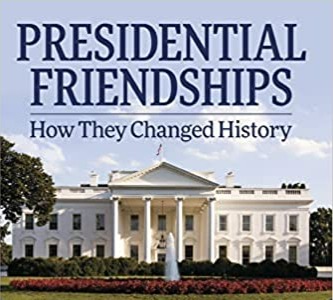 My new book, Presidential Friendships: How They Changed History, is now available for preorder through Amazon, Barnes & Noble, Walmart, and your local bookstore. It will be released by the publisher on August 3, 2022.

Presidential Friendships: How They Changed History tells the story of two pairs of presidential friendships, each involving a Roosevelt who powerfully shaped and expanded the presidency in the 20th century.

Many of our presidents knew each other personally and were friends with one another. These friendships opened new political opportunities that wouldn’t have otherwise existed, significantly shaping their mutual careers. They provided important continuity between administrations, helping practices and ideas transcend generations. In short, friendships between U.S. presidents have changed the course of history.

The warm and convivial friendship between Theodore Roosevelt and William Howard Taft bolstered their careers and ultimately led each to the White House. Tragically, a bruised ego and political cat-fight fractured this once close friendship as they battled one another with shocking vitriol during the 1912 presidential campaign. In a three-way race both Taft and Roosevelt lost to Woodrow Wilson. Theirs was a warm friendship and sad rivalry that shaped the landscape of the nation and the world. Through it all, Taft had the bigger heart and Roosevelt the bigger ego. In their post-presidency years, they experienced a limited reconciliation, although their relationship was never the same as it had been in the early years of the friendship. Taft openly wept at TR’s funeral.

President Franklin D. Roosevelt and newly-minted Congressman Lyndon B. Johnson formed a friendship of political expediency. They were both master politicians and thrived in the presence of one another. FDR might not have won a third term without the friendship and campaign fundraising of Johnson, and LBJ’s budding political career could have been cut short without FDR’s intervention to stop an IRS investigation.

May the stories of presidential friendships in this book inspire us and our leaders to intentionally cultivate relationships that transcend politics. Friendships change our lives and the course of history.

Click here to preorder your copy of my new book!