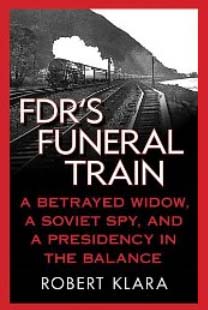 I recently finished reading Robert Klara’s 2010 book entitled FDR’s Funeral Train, the story of FDR’s death and the long train ride with his body that captivated the nation.  Klara writes like a novelist, but packed with historical detail so you feel like you were actually on the funeral train with FDR’s body as it traveled from Warm Springs, Georgia where he died, to Washington, DC, and at the funeral ceremony in the White House, and then back on the train for the final leg of the journey to Hyde Park where he was buried.

Slow down the train:  As the train hissed its way through the countryside, Roosevelt aide Steve Early delivered a message from Eleanor Roosevelt, who had flown to Georgia upon hearing of the president’s death, to a key train official: “The people down here were the President’s very good friends and neighbors, and it is the request of Mrs. Roosevelt that you instruct your enginemen, wherever they see groups of people along the railroad, or at the crossings, to slow down sufficiently for them to have a last view of the casket.  We have elevated it [in the last] car that this vision might be had.”  And the people did turn out in all weather and at all times of the day and night for one last glimpse.  As Klara writes, “the funeral train settled into a slow, steady rhythm – a kind of heartbeat that replaced the one that had ceased inside the little cabin.”

Meet the players:  Along the way, the reader meets the key players, from Eleanor Roosevelt bravely baring up even after discovering that FDR’s mistress from years ago, Lucy Mercer Rutherfurd, was present with him when he died.  Harry Truman as the new president is totally unprepared and uses the round trip train ride from Washington to Hyde Park as his time to get briefed and pull together his state of the union address he would deliver in just a few days to a joint session of Congress.

History as story:  FDR’s Funeral Train is history as it’s meant to be written – engaging, accurate, compelling.  Klara obviously knows and loves trains and his poetical descriptions make the funeral train come alive.  He is also an expert historian, who not only understands that history is a story, but knows how to tell it as a story, with all of its drama and uncertainty.  I highly recommend this 204 page paperback for anyone interested in presidential history.  For more of a summary of the book, go to Klara’s website.