President Obama Reflects on the History of the Moment

After taking the ceremonial oath of office for his second term on January 21, 2013, President Obama left the inaugural stage on the west front of the U.S. Capitol to re-enter the building.

One more time:  But as he got to the top of the stairs and before continuing on his way to sign official nominations and to lunch with congressional leaders, the President stopped and turned around.  “I want to take a look one more time,” he said to those around him. “I’m not going to see this again.” 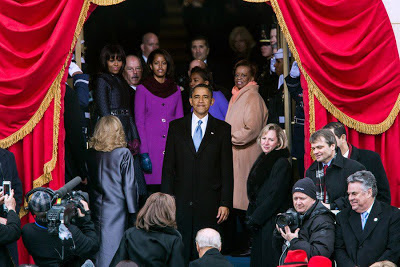 Reflection:  With that he paused for 24 seconds to look out at the crowds that had gathered on the National Mall, soaking in the moment, the history, the surroundings, and briefly allowing himself time to reflect and to be seen publicly reflecting.  It was a good moment.