The Plot to Kill Lincoln Before His Inauguration

On February 11, 1861, President-elect Abraham Lincoln spoke to a thousand citizens gathered in Springfield, Illinois to wish him well before he departed that day for Washington, D.C. to assume the presidency.

Lincoln’s remarks in Springfield:  At 8:00 a.m., Lincoln spoke movingly and prophetically from the back of the railroad car that would take him to the nation’s capitol:

My friends: No one, not in my situation, can appreciate my feeling of sadness at this parting.  To this place, and the kindness of these people, I owe everything…Here my children have been born, and one is buried.  I now leave, not knowing when or whether I may return, with a task before me greater than that which rested on Washington.

Assassination averted by detective:  Lincoln’s election was not universally popular in a country that was deeply divided over the issue of slavery.  In fact, detective Alan Pinkerton unearthed a plot to assassinate Lincoln in Baltimore, Maryland before the president-elect even made it to Washington.  By re-routing the train and disguising Lincoln (no small task for a man as tall as Lincoln), Pinkerton was successful in getting Lincoln safety to his destination. 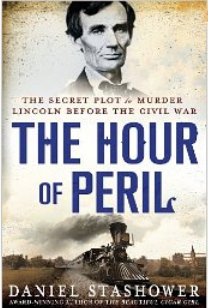 New book on pre-inaugural death threats: The story of the plot to kill the president-elect is the subject of a new book published on January 29, 2013 by Minotaur Books.  In The Hour of Peril: The Secret Plot to Murder Lincoln Before the Civil War, author Daniel Stashower tells the story of the threats against Lincoln and how Pinkerton was able to keep Lincoln safe.

Book praise from historian:  Noted Civil War historian James M. McPherson writes that the book “reads like a first-class detective novel . . . Pinkerton’s tireless energy prevented a tragedy that might have destroyed the republic.”

What if?  One can’t help but wonder how our nation’s history would have turned out differently had Lincoln been assassinated before he even took the oath of office.