November 2 marks the birthday of two U.S. Presidents: James Polk, born in 1795, and Warren Harding, born in 1865. 70 years separate the births of the 11th and 29th Presidents of the United States.
Both born after significant events:  Both were born shortly following watershed events for the nation. Polk was born only six years after Washington took the oath of office on April 30, 1789, and the U.S. Presidency, and the Constitution as we know it, became the foundation of American government. Harding’s birth came mere months after Lincoln’s death and the end of the Civil War, the conclusion of a period which had shaken the nation, and called into question the very Constitution and union established less than a century before.
Uncommon birthday overlap:  The birthday of two presidents on one day is not a common occurrence. In fact, the only other day on which two presidents were born is December 29, birthday of Andrew Johnson in 1808, and Woodrow Wilson in 1856. However, there is some controversy about about this–Woodrow Wilson celebrated his birthday on December 28, not December 29.  While many biographies and histories list his birth date as December 28, the Wilson family Bible confirms that he was born on December 29. You can read more about Wilson’s birthday on my previous blog posting by clicking here. 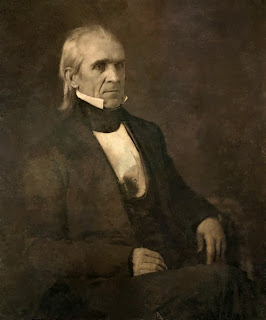 Polk as first “Dark Horse” candidate:  The elections and presidencies of Polk and Harding share a number of similarities. Both were elected president for only one term. Both were what is termed “dark horse” candidates–that is, they emerged as candidates and were nominated at party conventions only after a number of ballots had been cast. Polk’s name, in fact, was not mentioned until after the seventh ballot was cast (he received no votes up till that time). Initially, the favored candidate was former president Martin Van Buren, and it was only after it became clear that he would not receive the required two-thirds majority that the name of House Speaker James Polk was advanced. Polk was finally nominated on the ninth ballot. He was the first “dark horse” candidate to be elected to the Presidency. 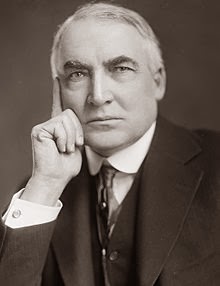 Harding nomination sealed in “smoke-filled room”:  Harding, on the other hand, was considered a candidate for the nomination prior to the Republican convention, as well as a number of other possible candidates, among them Leonard Wood, Hiram Johnson, and Frank Lowden. At the beginning of the convention, Harding trailed behind these other candidates, but after nine ballots failed to see any candidate receive the required majority, Republican leaders decided, during various late night “smoke-filled room” meetings, that Harding was the best compromise, the candidate most likely to be acceptable to the majority of factions. He was chosen as the Republican candidate on the tenth ballot, one more than the number cast to nominate James Polk 76 years earlier.
Lack of enthusiasm for presidency: Neither man expressed unqualified enthusiasm for the office of president.
November 2 and election day:  By an interesting coincidence, Polk’s and Harding’s birth date is also the first day in November on which the Presidential election can be held. According to federal law, the election is held on the day after the first Monday in November. This means that the election cannot be held on November 1. The election can fall between November 2 and November 8. This choice was implemented in 1845, a year after Polk’s election.  Polk was elected on November 4, 1844, just two days after his 49th birthday, making him the youngest man elected to the presidency up to that time.