In the newly published and highly readable book Pat and Dick – The Nixons, an Intimate Portrait of a Marriage, historian and psychologist Will Swift has written a riveting tale that recounts the career and crises of Richard Nixon as filtered through the lens of his marriage to his wife, Pat, with its full share of tensions and troubles.  I highly recommend this book and think you will enjoy reading it. 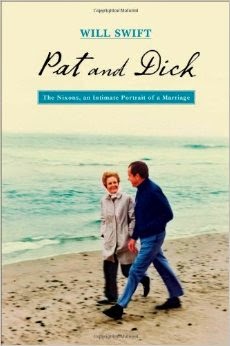 I’m giving away 3 free copies of the book:  In a little over a month, on May 26, 2014 (Memorial Day), courtesy of the publisher Threshold Editions (a Division of Simon & Schuster, Inc.), I will draw three names from a list and give away and send three free copies of Pat and Dick to a trio of lucky history buffs. It’s easy to be eligible for this drawing.

Book humanizes Richard Nixon:  We generally think of Richard Nixon as just a politician and he certainly was that – down to his bones.  But he was also a husband and a father with two daughters.  This well-researched book humanizes Nixon as we gain a deeper understanding of what drove him.  His personality, fears, struggles, and insecurities are all vividly painted in this portrait of our 37th President.  The book helps us view Nixon not just as a politician, but as a person, and Pat not just as a silent partner in a marriage, but as a vital part of what allowed Dick to succeed.

An insecure and paranoid couple:  Pat was often the reluctant politician’s wife, but she rose to the occasion as his partner and became known as a woman of warmth and graciousness, just as Dick became known for his awkwardness and attacks on others.  But they both went through life together united in one thing.  They were insecure and paranoid, always feeling that the world (especially the media) was out to get them, and that the attacks against each of them personally (but especially Dick) were totally unjustified.  They viewed all of their experiences against this “us/them” backdrop and this mentality often bound them together and drew them closer to one another.  For Dick, everything was political, and he was deliberate in the careful marketing and portrayal of his marriage to meet his political objectives.

Dick chooses career over family life:  In this portrait of the marriage, we see how Dick was driven by his career as a politician.  He worked long hours, pushing himself to succeed, often as a mask to cover his insecurities.  In one sense, he sacrificed his marriage and family life for his career, often ignoring Pat. Family vacations were often cut short (or didn’t happen) because Dick needed to be back where the action was in Washington.  Dick was never known to have a mistress, except perhaps his career.

Pat as a support:  Pat saw her duty as being present to support her husband, and she fiercely stood by him and defended him.  When Dick was about to go on television to deliver his now famous Checkers speech defending his actions of accepting gifts, he hesitated about going through with it, and it was Pat who encouraged him.  Neither of them were quitters, and their hardscrabble upbringings contributed to shaping who they became.

Pat’s role in grounding Dick:  For all of her reluctance at being a politician’s wife, without Pat, Dick may not have become president.  Throughout their lives, Pat played a significant role in grounding Dick, in helping him through his times of despondency, in rolling up her sleeves to campaign for him, and in dealing with his absences from home while he relentlessly worked to build his reputation and distinguish himself, especially in his early years in Congress.

An enduring marriage:  Author Will Swift writes that “their marriage – rich with flaws and virtues, constantly reinvented in crisis after crisis, enduring for half a century in the public arena – makes them figures crucial to, and emblematic of, the American story.”

Get your free copy of the book:  Don’t forget about the drawing for three free copies of Pat and Dick – The Nixons, an Intimate Portrait of a Marriage that I will hold on May 26, 2014.  To be eligible, you just need to be a subscriber to my Presidential History Blog at www.PresidentialHistory.com. See above for more details about the drawing.