What Was Jimmy Carter’s Response to Kennedy’s Assassination? 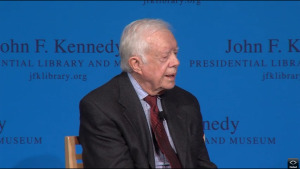 In a November 20, 2014 interview at the John F. Kennedy Presidential Library and Museum, former President Jimmy Carter was asked by Ronan Farrow the following question: “How does President Kennedy’s legacy echo in your mind today?”  Carter gave a very moving response in which he recounted where he was and his response when he heard about Kennedy’s assassination on November 22, 1963.

“I wish that some of you would go to Google and look up the speech I made here when the Kennedy Library was dedicated. I was President of the United States, and I came here to Boston with my heart filled with emotion. I was a peanut farmer when President Kennedy was shot, and I heard about it from one of my customers. I went outside and sat on the steps and wept. And to me, that was the greatest blow that I had suffered since my father died. Because I felt that he epitomized with his words and with his actions the finest aspects of my country, and I guess I felt closer to him because he and I were both in the navy. I was on two battleships and three submarines. It was one of the most grievous blows I ever felt, and I expressed those sentiments to some degree when I was the main speaker at the dedication of this library – and I still feel that way. And it’s a great source of pride to me whenever I might be compared in some ways with him.”

Carter in 1963:  In 1963, Carter had just turned 39 years old, just a few years younger than the assassinated Kennedy, who he never met.  While he was a peanut farmer, he had also been elected in 1962 to the Georgia State Senate.

Carter at 1979 dedication of JFK Library:  At the October 20, 1979 dedication of the John F. Kennedy Presidential Library, where President Carter was the main speaker, he provided a few additional details of where he was and his response to Kennedy’s assassination:

“On that November day, almost 16 years ago, a terrible moment was frozen in the lives of many of us here. I remember that I climbed down from the seat of a tractor, unhooked a farm trailer, and walked into my warehouse to weigh a load of grain. I was told by a group of farmers that the President had been shot. I went outside, knelt on the steps, and began to pray. In a few minutes, I learned that he had not lived. It was a grievous personal loss–my President. I wept openly for the first time in more than 10 years–for the first time since the day my own father died.”