The year was 1783.  British General Lord Cornwallis had surrendered at Yorktown in 1781.  George Washington had held together the rag-tag army of continental soldiers for eight long years, hoping against hope, and in the end had miraculously defeated the world’s mightiest military force.

Military unrest:  But all was not well with the morale of the military that had accomplished so much in winning colonial freedom from England.  There was a growing unrest by officers and soldiers who had sacrificed so much, but who were not receiving their full pay or their promised pensions.  Congress, under the weak central government enshrined in the Articles of Confederation, lacked the ability to raise sufficient money to pay the officers, and had to rely upon the states for its revenue.  After the Revolutionary War ended, states were even more reluctant to pony up money and meet the requests of Congress to pay the soldiers.  And thus, the soldiers who had weathered so much found themselves bitter (and poor) over the failure of the federal government to compensate them for their sacrifice.

Mutiny planned:  Into this tense situation, a group of officers anonymously called for a meeting, with the implied threat of planning a military takeover from the powerless Congress.  George Washington stopped the meeting from occurring and instead called for a meeting a few days later, hoping that tempers would cool in the interim.  On March 15, 1783, the officers met.  Washington surprised the officers by showing up at the meeting and speaking.  His initial words did little to persuade the unruly offi 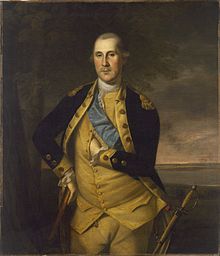 cers to back down.

Reading letter from Congress:  With his prepared remarks over, Washington stumblingly began to read a letter from a congressman about the problems faced by Congress in raising sufficient money.  With failing eyesight, Washington struggled with seeing clearly enough to read the letter.  After a few sentences, he stopped, reached into his pocket, pulled out a pair of spectacles, and put them on.  This shocked the officers who had never before seen their gallant and robust leader wearing glasses.  As Washington put on the glasses, he disarmingly apologized to the assembled officers: “Gentlemen, you will permit me to put on my spectacles, for I have not only grown gray but almost blind in the service of my country.”

Instant change of mood:  In the instant that Washington spoke these words, the mood of the mutinous officers shifted.  Some men began to weep.  Others were visibly moved by understanding more fully the extent of Washington’s sacrifice during the war.  Washington finished reading the letter from Congress and left the meeting.  The assembled officers who had always been close to the General voted to not take military action and to support the rule of Congress.

26 words:  With those 26 words, Washington disarmed a potential military mutiny that could have shifted the embryonic nation away from civilian control of the military and turned our government into one in which the military controlled civilian affairs.  Of course, we’ll never know what might have really happened, but March 15, 1783 was a defining moment for maintaining an important principle of government.  And it was all solidified by George Washington’s simple, honest, and vulnerable words.

More information:  For more information about Washington’s role in this event, which is known as the Newburgh Conspiracy, click here.