Unlike Theodore Roosevelt, who called Thomas Jefferson “perhaps the most incapable Executive that ever filled the presidential chair,” President John F. Kennedy had a highly exalted view of the nation’s third president, recognizing him for his incredible intellect and talents.

On April 29, 1962, Kennedy held a dinner at the White House honoring Nobel Prize winners from the western hemisphere.  In the President’s opening remarks, he famously stated the following: 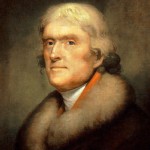 “I want to tell you how welcome you are to the White House.  I think this is the most extraordinary collection of talent, of human knowledge, that has ever been gathered together at the White House, with the possible exception of when Thomas Jefferson dined alone.  Someone once said that Thomas Jefferson was a gentleman of 32 who could calculate an eclipse, survey an estate, tie an artery, plan an edifice, try a cause, break a horse, and dance the minuet.  Whatever he may have lacked, if he could have had his former colleague, Mr. Franklin, here we all would have been impressed.” 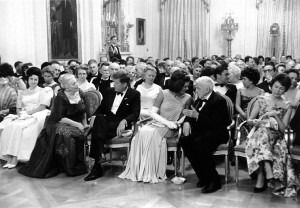