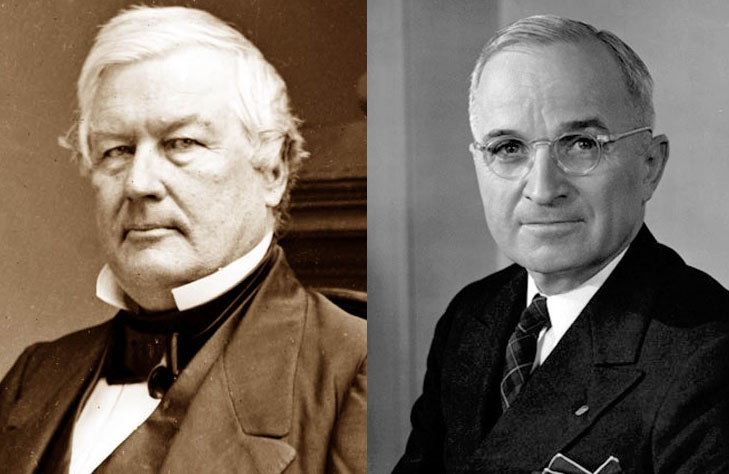 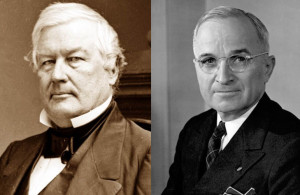 While almost a full century separated the births of Harry Truman and Millard Fillmore, there is one unusual thing they both share in common, besides ascending to the presidency upon the death of their predecessor.

Death of Predecessor:  Fillmore became president on July 10, 1850 upon the death of Zachary Taylor the previous day, while Truman became chief executive after Franklin D. Roosevelt died in office on April 12, 1945 after more than a dozen years as president.

Running for President:  While both sought to renew their lease at 1600 Pennsylvania Avenue by seeking the nomination from their party for a full term as president, only Truman was successful in this. Fillmore was rebuffed by the Whig party when he attempted to run for president in 1852 (although he did run unsuccessfully for president four years later at the head of the Whig and “Know-Nothing” parties).  Truman won the Democratic nomination in 1948 and against all odds of the pollsters and popular opinion (“Dewey Defeats Truman” blared the premature headline of the Chicago Tribune) won a full term as president.

History’s Verdict:  Neither are Fillmore and Truman in the same class when it comes to opinions of presidential greatness.  Based on surveys and polls of both scholars and voters over the years, Fillmore has consistently gone down in history at the bottom rung as one of the ten worst presidents.  Truman’s reputation, however, has grown steadily, especially since the publication in 1992 of David McCullough’s Pulitzer Prize winning biography, Truman, and the former bankrupt haberdasher ranks among the top ten greatest presidents.  By the way, Truman, with the benefit of historical hindsight, agreed with the historians about Fillmore, who he called a “detached, do-nothing president,” and a “nonentity.”

No Award Please:  But our 13th and 33rd president, who both lacked a college education, do share something unusual in common.  They both turned down prestigious public awards that were offered to them.