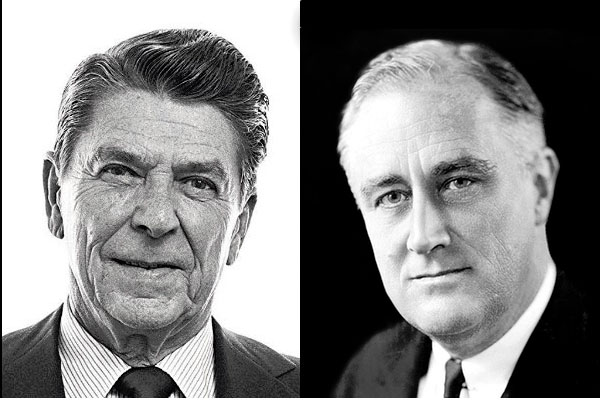 Ronald Reagan, our 40th president and the icon and hero of the modern conservative movement in American politics, was once a Democrat.

Reagan Idolized FDR:  As a young man who came of age during the Great Depression, Reagan idolized Franklin D. Roosevelt.  The New Deal rescued the Reagan family finances, proving work for Reagan’s father, Jack.  “I soon idolized FDR,” Reagan later recalled.  He would promote FDR whenever he could as part of his radio announcer job, and he cast his first vote ever – for Roosevelt for president.  He would go on to vote for FDR three more times and cast his vote in 1948 for Harry Truman. He was, in his own words, “an ardent New Dealer.”

Fireside Chats:  In 1933, just days after FDR’s inauguration as president at the height of the Depression, with banks failing at an alarming rate and more and more Americans being thrown out of work, Reagan tuned in his radio.  He joined hundreds of thousands of other Americans on March 12 to listen to FDR’s first Fireside Chat as the president explained the banking crisis.  Reagan developed an imitation of FDR delivering a Fireside Chat with which he would amuse his friends.

What Reagan Learned from FDR:  Reagan learned from Roosevelt the importance of speaking to the common man, of offering encouragement and comfort, and of making complex issues simple and understandable.  Reagan later recalled of that first Fireside Chat, in words that almost sound like him describing himself, that FDR’s “strong, gentle, confident voice resonated across the nation with an eloquence that brought comfort and resilience to a nation caught up in a storm and reassured us that we could lick any problem.”

Labor Disputes and Taxes:  But it was in California after Roosevelt’s death that Reagan’s political philosophy began to shift.  As an actor, he became involved with the Screen Actors Guild and served as president of this actors’ union.  But he became disillusioned by some of the bullying tactics (even against him physically) of the labor movement.  His slowly shifting political philosophy was also nudged along when he found himself paying 90% of his earnings in taxes.  Finally, in 1962, at age 51, he made formal what had been simmering for years: he left the Democratic Party and became a Republican.  He liked to say that he hadn’t left the Democratic Party, but it had left him and no longer reflected his opinions.  From there, he rose to be a prominent conservative spokesman, was elected twice as governor of California, and eventually succeeded in his quest of a dozen years when he won the presidency in 1980.

Continued Respect for FDR:  Despite Reagan closing the door against the Democratic Party, he continued to hold an abiding respect for Roosevelt, and learned from him.  FDR became the master communicator through radio, and Reagan became the great communicator through television.  On signing a bill to stabilize Social Security, he reaffirmed Roosevelt’s signature Social Security legislation with the words that “Franklin Roosevelt’s commitment that Social Security must always provide a secure and stable base so that older Americans may live in dignity.”  He would quote FDR in his speeches and letters and remind people that, like Roosevelt, he didn’t believe that public employees had the right to strike.

New Book:  Well-known presidential historian H.W. Brands has written a new biography of Reagan (Reagan: The Life), published in May 2015.  Click here to read an article by Brands that addresses more of the FDR-Reagan connection.