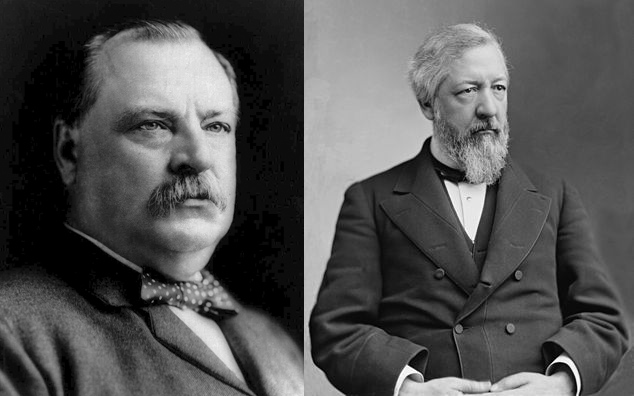 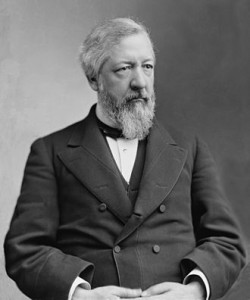 He was a charismatic personality and speaker.  His dedicated followers idolized him.  He was a big name.  He was known for his sharp wit, his memory for names and faces, and had personal charm.  He had mansions in different states.  There were whispers and hints about the propriety and ethics of some of his business dealings.  He said that his financial affairs were strictly a personal matter and refused to discuss them or disclose details.

1884 4th ballot victory:  After two failed attempts to win the GOP presidential nomination, the ship of James G. Blaine finally arrived for the 1884 presidential election.  He was nominated for president by the Republican Party on the fourth ballot at their Chicago convention.  Blaine had been a fixture in Republican Party politics for a quarter century.  He had served as Speaker of the House of Representatives and as U.S. Senator, both from Maine, and as Secretary of State under presidents James Garfield and Chester Arthur.

Questionable ethics:  But the accusations of accepting bribes and of financial corruption that had derailed his quest for the nomination in 1876 and 1880 came back to haunt him in the 1884 campaign. Blaine was known as the “Magnetic Man” for his magnetic personality.  But the Democratic Party, eager to install the first from their party in the White House since James Buchanan in 1856, came up with the campaign taunt of “Blaine, Blaine, James G. Blaine, the continental liar from the state of Maine.”

The Revolt of the Mugwumps:  The shadow hanging over Blaine’s ethical behavior was more than some reform Republicans could stomach.  They had principles and didn’t want to be associated with a politician whose ethics appeared to be subject only to what would personally profit Mr. Blaine.  They also wanted to implement civil service reform, end patronage jobs, and were in favor of lower tariffs. And so a group of influential Republicans bolted from the party, refusing to support Blaine as the Republican nominee.  These Republican dissenters were called “Mugwumps,” an Algonquian term meaning “important person,” meant to deride the GOP bolters as being  sanctimonious for claiming moral superiority.  The Mugwumps were generally college educated and professional men with significant support in New York and New England.

Personal vs. public life:  The Mugwumps, instead of supporting Blaine as the Republican nominee, instead urged support for, and voted for, Democrat Grover Cleveland, a man of unquestioned public integrity.  While Cleveland’s record of public service was beyond reproach, his personal life was not, and he admitted to having fathered a child out of wedlock.  One pundit observed that

“We are told that Mr. Blaine has been delinquent in office but blameless in public life, while Mr. Cleveland has been a model of official integrity but culpable in personal relations. We should therefore elect Mr. Cleveland to the public office for which he is so well qualified to fill, and remand Mr. Blaine to the private station which he is admirably fitted to adorn.”

A close election:  In a close election, the support of Grover Cleveland by the Mugwumps was significant in defeating Blaine and electing Cleveland.  Cleveland won New York’s 36 electoral votes by a margin of just 1,149 votes out of more than 1.1 million cast.  Had the Republican Party remained united behind Blaine, it is likely that Blaine would have carried New York, and with it a majority of votes in the Electoral College, sending him to the White House instead of Cleveland.