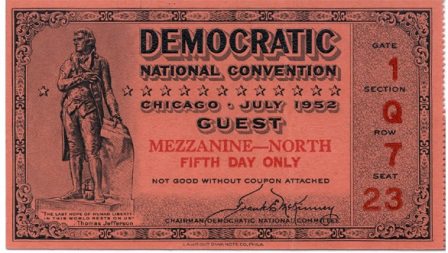 He was a populist, who was known to television audiences. He won more primaries and more popular votes than any other candidate.  By the time of the national convention, he was in the lead on delegates but didn’t have enough for the nomination on the first ballot.  The party establishment didn’t trust him and viewed him as a maverick, and so they went looking for an alternative candidate.

Estes Kefauver:  Estes Kefauver was a progressive liberal Senator from Tennessee who was known for his televised investigations against organized crime in 1951.  With Americans just beginning to buy televisions, his hearings made him famous and well-known.  Elected in 1948 to the Senate, he ran for President in 1952 when he was just 49 year-old and still in his first term.

1st ballot:  He entered the 1952 Democratic primaries and won 12 out of 15 races.  He had 340 delegate votes on the first ballot in Chicago, with a comfortable lead over Illinois Governor Adlai Stevenson who had 273 votes.  Stevenson had not campaigned and had not entered any primaries and insisted, until late in the process, that he would not be a candidate.  But a “Draft Stevenson” campaign, orchestrated by the party bosses, propelled him into the race.  Georgia Senator Richard B. Russell had 268 votes on the first ballot.  But no candidate had enough for the nomination on the first ballot.

Stevenson victim of anti-intellectualism:  Adlai Stevenson, was a gifted orator, intellectual, and moderate.  He would also be the Democratic standard bearer in 1956 (with Kefauver as his vice-presidential running mate that year).  He lost in both 1952 and 1956 to Dwight Eisenhower.  In 1956, an enthusiastic supporter came to him and said “Governor Stevenson, all thinking people are for you!” Stevenson responded, “That’s not enough. I need a majority.”

Last contested convention:  The 1952 Democratic convention was the last time that the nominee of a major political party was not nominated on the first ballot.  Prior to 1952, there had been 16 other conventions at which the candidate with the most votes on the first ballot did not win the nomination.  Click here to read my earlier blog on The Curse of Contested Conventions.  Part of the reason we have not seen a contested convention since 1952 relates to the rise in the number of primaries, which began to grow significantly after party reforms in 1972.