Media, Marketing, and the Making of the President 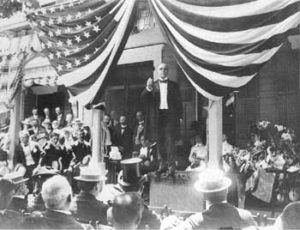 William McKinley Campaigning on his Front Porch in Canton, Ohio

Every four years, the American people elect a President. And while we hope that the voters look at the policy positions of the candidates, their temperament and suitability for the office, their experience, and qualifications, the fact is that running for President involves a lot more than simply these things. Sometimes, the voters end up being influenced significantly by the marketing or advertising stimulation that has become such an important element of presidential elections.

Early campaigning: In the early days of our nation, presidential candidates did not campaign for the office, leaving that task to their supporters. It was deemed undignified to seek the office; instead, it was felt that the office sought the man. Gradually, candidates began to make more speeches and appearances. In the late 1800s and early 1900s, rather than travel the country campaigning, many candidates including James Garfield, Benjamin Harrison, William McKinley, and Warren Harding all conducted “front porch campaigns” in which thousands of supporters were brought to the candidates home towns to trample the lawn of the candidate and listen to the candidate make a few non-spellbinding comments from their front porch.

Slogans: Slogans are sometimes about the candidate, the opposition candidate, America, the future, or hope.

The Ground Game: Successful presidential campaigns are also built around good campaign organizations that include skilled and knowledgeable strategic and policy advisers, robust computer databases and technology that drives donations, volunteer recruitment and coordination, polling, and getting out the vote. Understanding how the media works and how political party rules work are also important parts of the campaign.

Media and Social Media: Since the 1960s, the cost of presidential campaigns has increased astronomically with the advent of television advertising as an important component of campaigns, both positive and negative campaigning. And in 2016, social media has taken on a new and increased role in candidates getting their messages out to millions of supporters and to the traditional media. Twitter, in particular, has become the 21st-century version of dueling that was practiced in the 1700s and 1800s when two people had differences or one felt their honor had been insulted by another.

Free video of lecture is online: On April 28, 2016, I spoke on these and other subjects (branding, logos, historic media moments, newspaper endorsements, and whether the media is biased) along with Dr. Michael Artime at a community lecture at the University of Puget Sound in Tacoma, Washington. The video of the lecture, followed by the question and answer period is available for free online by clicking here. You can also visit my YouTube channel at https://www.youtube.com/user/preshistory to watch the other five lectures in the series, which is entitled “Who Will Win the White House?”