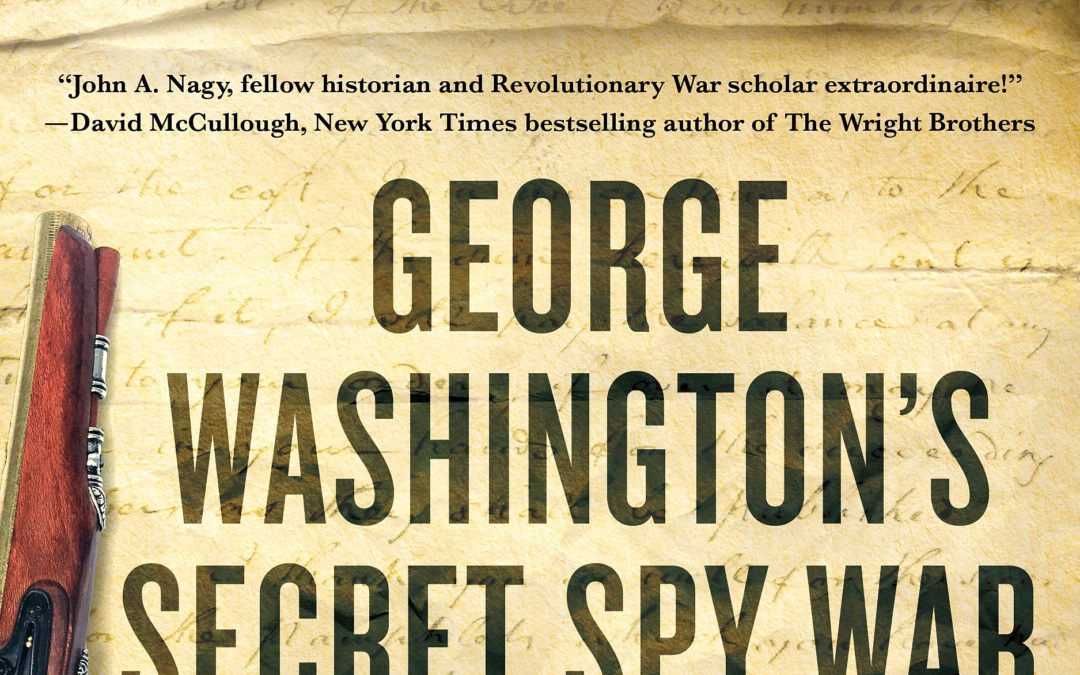 In today’s world, we hear a lot about espionage, with computer hacking being a daily occurrence, electronic surveillance, eavesdropping, and human ground intelligence in our increasingly complex and dangerous world.  Spying is big business and governments use it to gain an advantage and keep one step ahead of the plans of other countries.  Interestingly, George Washington knew a thing or two about spying and used less modern techniques to conduct spying operations that helped ensure the rag-tag band of colonists defeated Great Britain in the Revolutionary War.  The ironic thing is that Washington, who was known for his honesty, “routinely used deception to his advantage whenever he could and was constantly on guard for deceptions by the British being played against him.” 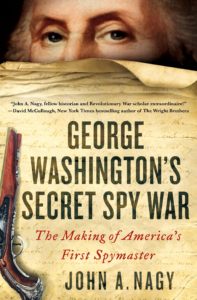 New book published: On September 20, 2016, St. Martin’s Press published a new book entitled “George Washington’s Secret Spy War: The Making of America’s First Spymaster,” by John A. Nagy.  I’ve started the book and it looks like it will be a fascinating read, focusing on an element of Washington’s life that hasn’t received much attention.

Excerpt:  The following is an adapted excerpt published with permission from George Washington’s Secret Spy War: The Making of America’s First Spymaster by John A. Nagy. Published by St. Martin’s Press. Copyright 2016. Deception Battle Plan: The Sting—Executing the Plan

In this phase of the Deception Battle Plan, the planning was over and everything was in play and the game was live. Washington would now find out if all his efforts at deception had worked. The big risk was that the British saw through the deception and were running their own counter-deception. If so, Washington and the Continental and French armies would be heading into a trap.

During the American Revolution, Washington was getting his troops prepared for the long arduous march to Virginia. On August 5, 1781, he tightened security at the Continental Army’s encampment. He directed that “[n]o person excepting those belonging to the army is to come into camp from the country above or northward of the camp but by” three specific entrances. A commissioned officer was posted at each of the places who was to give a specific short ticket to such persons as he permitted to pass into camp. Washington ordered that “[a]ny person found in camp not belonging to the army without such a ticket is to be taken up as a spy and conducted to the general of the day.” To build up the stamina of the soldiers who would be marching to Virginia, he ordered on August 12 that “[n]on com-missioned officers and soldiers to be served with a gill of rum per man this afternoon.” On August 15, he issued a General Order that said, “Army will hold itself in the most perfect readiness to move at the shortest notice.” The combined American and French armies had difficulty getting started. The general lack of horses and bad condition of the horses in the French army were part of the reason for the delay in the departure until August 19. British spies were very active and intelligence of the French army’s preparations and movements reached the British headquarters in New York City on the 20th.

Because of the deception plan, all of Washington’s discussions about the destination were focused on an attack at Staten Island and a placement of troops at Sandy Hook to assist the French fleet in getting over the sandbar. By keeping the real destination a secret even from most of the officers and all of the enlisted men, Washington believed it would reduce the chance of an accidental leak or intentional divulging of the real objective to British spies who were always about. In keeping the men from discovering what was happening, he did not issue General Orders between August 20 and 27 except for baggage concerns on the 22nd and a position assignment on the 24th.

When a deception strategy is used, there is always the possibility of a counter-deception. Washington’s intelligence was that the British “have been throwing troops upon Staten Island.” He had to wonder if the British discovered his deception and were preparing to attack his troops while on the march, or had they bought his deception strategy and were preparing to defend Staten Island? Only time would tell. As it turned out, General Clinton was indeed running a deception of his own. He had a sham deserter deliver a fake letter from François Jean, Marquis de Chastellux, negatively reflecting on Rochambeau and his command. The messenger was to claim to be a friend to Rochambeau and was to collect intelligence while at the French camp. Rochambeau sent him back to the British camp to try and obtain more information.

When the French troops reached Pompton on the 26th, Rochambeau sent Jacques Pierre Orillard de Villemanzy, the French commissary of war, orders to work on establishing the bakers’ ovens and to bring up supplies for the ovens. “He was let into the secret and told that it was our intention to nourish the army from that bakery in its march to Philadelphia.” Villemanzy was instructed that they needed to convince the enemy that the design was for an attack on Staten Island. “He did so well with this that he caused himself to be fired upon by the English batteries [on Staten Island] in trying to collect the bricks which were at the mouth of the Raritan [Perth Amboy].”

Washington wrote in his diary for August 29, 1781, “The whole [army] halted as well for the purpose of bringing up our rear as because we had heard not of the arrival of Count de Grasse and was unwilling to disclose our real object to the enemy.” He wrote the next day, “[A]s our intentions could be concealed one march more. [Because of the] idea of marching to Sandy Hook to facilitate the entrance of the French fleet within the bay.” Although the entrance to Lower New York Bay is wide, it is not very deep. To get the French warships into the bay, some of the cannons would have needed to be removed to allow the ships to get over the sandbar. Washington allowed the rumor to circulate that they were going to help the French fleet get over the bar. He had already put out the rumor of building batteries at the Highlands for that purpose. Washington fell back on his old practice of using one lie to support another lie.

British headquarters was concerned with what Washington was doing. Oliver De Lancey, adjutant general to the British army at New York, had heard that a body of troops were moving to Newark and ordered Major Thomas Ward, commanding the Loyal Refugee Volunteers at Bergen Neck, New Jersey, to send out as many people as he could to find out what was happening. Ward sent two men, David Demaree and Green, to the Clove and two others to Newark. The men going to Newark were having a difficult time getting there. On the 23rd Ward sent out John Moore to see what he could discover. He reported to Oliver De Lancey that Moore was able to pass among the American troops. Isaac Ogden received an intelligence report from New Jersey. The spy reported on a conversation with Bill Livingston, the son of New Jersey Governor William Livingston.

Washington arrived in Philadelphia on August 30 or 31.

Robert Morris offered his house to him. He and Rochambeau were “received by crowds of people with shouts and acclamations.” He left the city on September 5 and had traveled three miles below Chester, Pennsylvania, when he received word of the safe arrival of de Grasse and his fleet in the Chesapeake Bay.

Rochambeau traveled from Philadelphia to Chester by boat. As he approached the shore he later wrote, “We discerned in the distance General Washington was standing on the shore and waving his hat and a white handkerchief joyfully . . . MM. de Rochambeau and Washington embraced warmly on the shore.” At this point Washington knew his successful deception strategy had given them the chance to capture Cornwallis and his army in Yorktown.