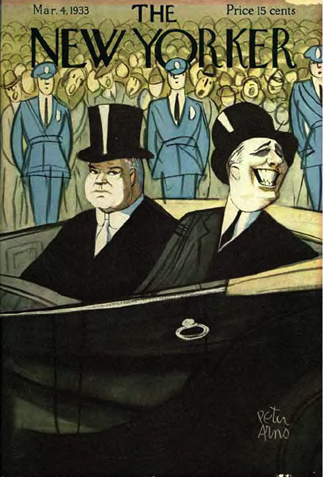 As the United States prepares for the transfer of power between presidents, it’s a good time to pause and remember some interesting facts about previous inaugurations. Prior to 1937, the president was inaugurated on March 4 following the November election.  That changed with FDR’s second inauguration and the new date was fixed as January 20 by 20th Amendment to the Constitution.

Location:  Other than presidents who took the oath of office in a different location upon the death of their predecessor, all presidents have been inaugurated in Washington, DC starting with Thomas Jefferson in 1801.  George Washington was inaugurated for his first term in 1789 in New York City, then the nation’s capital, and in Philadelphia in 1793 for his second term, making him the only president to be inaugurated in two different cities.  John Adams was also inaugurated in Philadelphia in 1797, but didn’t move into the Executive Mansion (now the White House) until November 1800, just before he found out he had lost his re-election bid to Thomas Jefferson.

Skipping Town:  Sometimes, there are palpable tensions between the outgoing and incoming president.  In 1801, John Adams did not attend the inauguration of Thomas Jefferson and slipped out of Washington in the early morning hours of March 4, 1801 so he would not have to be present to watch the man who beat him take the oath of office.  Like father, like son, in 1829, outgoing president John Quincy Adams refused to attend the ceremonies for the man who had beaten him, Andrew Jackson.

Last Minute Affair:  In 1877, no one knew until two days before the March 4th inauguration date whether Republican Rutherford Hayes or Democrat Samuel Tilden had won the election.  This was due to disputed election results in three southern states (including Florida!) that was turned over to 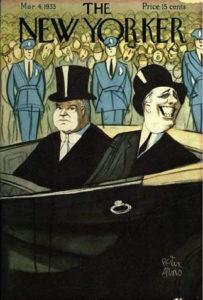 a congressionally appointed Electoral Commission to decide who won those states.  Voting strictly on party lines, the Commission awarded the three states and their electoral votes to Hayes, handing him the presidency.  There were threats on Hayes’ life prior to the inauguration.  Because March 4 that year fell on a Sunday, Hayes took the oath privately on Saturday, March 3 and then publicly on Monday, March 5.

Silent Treatment:  In 1933, Franklin D. Roosevelt was inaugurated as president after having beaten incumbent Herbert Hoover.  After meeting with FDR after the election, Hoover privately called the President-elect a “gibbering idiot.”  On the traditional ride from the White House to the Capitol for the inaugural ceremonies, Hoover was sullen and dour and barely spoke a word, while the ebullient and confident FDR smiled broadly to the crowds.  It was a shocking reversal of their friendship just a dozen years earlier, in which Roosevelt had said of Hoover that “he is certainly a wonder, and I wish we could make him President of the United States.  There could not be a better one.”

Long and the Short of It:  George Washington holds the record for the shortest inaugural address at just 133 words in 1797.  In 1841, 68 year old William Henry Harrison, without a coat or hat on a bitterly cold day in Washington, delivered the longest inaugural address in history, lasting close to two hours and 8,445 words.  A month later he was dead from pneumonia.

Get the Oath Right:  There have been at least three botched deliveries of the oath of office, all attributable to the man administering the oath.