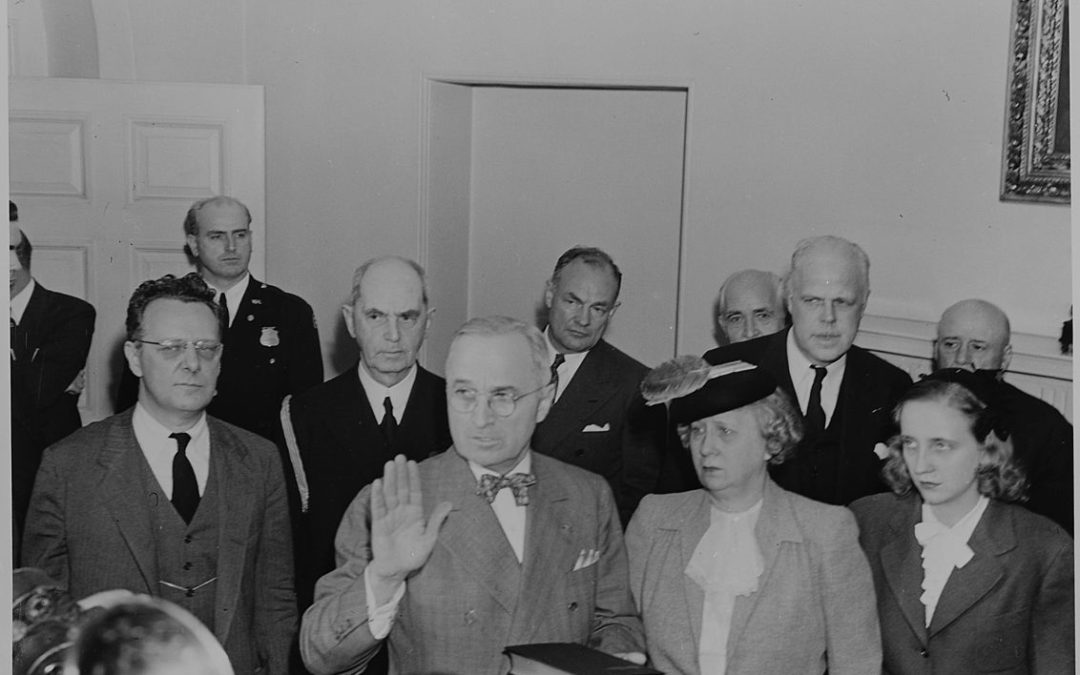 The have been few times in history when shape of the geopolitical world changed more dramatically than during four world-shaking months in 1945:

The man at the center of these momentous events was small-town failed businessman and farmer who was suddenly catapulted into the Oval Office upon FDR’s death.

Truman Becomes President:  Summoned to the White House on April 12, 1945 and informed that he was now president, Harry S Truman asked FDR’s widow, Eleanor, if there was anything he could do for her.  She replied by asking “Is there anything we can do for you? For you are the one in trouble now.” He immediately recognized how woefully unprepared he was for the challenges ahead. FDR had failed to brief him or keep him in the loop during Truman’s 83 days as vice president. “I felt like the moon, the stars, and all the planets had fallen on me,” Truman confessed to a group of reporters on his first full day as president.  He was an accidental president.

Previous Accidental Presidents:  America has had nine accidental presidents who were elevated to the office by the death or resignation of a president.  More than half of this select group – most of whose names we barely recognize – faded silently into history as their attempts to claim the White House on their own failed. But four of these accidental presidents went on to win a full term of their own, starting with Theodore Roosevelt in 1904, who famously crowed to his wife on his victorious election night that he was “no longer a political accident.” Twenty years later, Calvin Coolidge, who had inherited the presidency upon Warren Harding’s death, signed his own lease on the White House. In 1948, Harry Truman came back from an almost certain political graveyard to surprise the pollsters and pundits with his victory over Thomas Dewey. And in 1964, the voters overwhelmingly chose Lyndon Johnson to occupy the Oval Office for fou 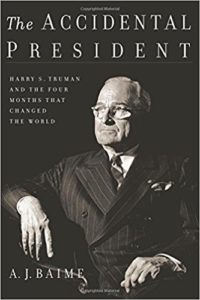 New Book on Truman:  An insightful and highly readable new book (four years in the making) will be published on October 24, 2017 titled “The Accidental President: Harry S. Truman and the Four Months That Changed the World,” by award-winning author A.J. Baime. I had the pleasure of reading an advance copy of the book from the publisher, Houghton Mifflin Harcourt, and interviewed Mr. Baime on October 10, 2017.

Truman’s Character:  When Harry Truman became president, everything was stacked against him.  He was an unknown and untested quantity and faced a world at war.  He knew little more about world affairs than most Americans.  And yet he competently plunged into the presidency and made quick decisions, despite doubts he (and many Americans) had about his abilities.  A.J. Baime told me that Truman relied on principles he learned early in his life: Do the right thing. Honesty is the best policy. Make yourself useful. And undoubtedly, Truman drew strength from the eleven long years that he plowed the 600 acre family farm in Grandview, Missouri. That experience helped build his character – and gave him plenty of time to think and dream of getting away from the monotony of farm work. “I’ve always had a sneakin’ notion that someday maybe I’d amount to something,” the 27 year old farmer wrote after five years of obscurely tending the land.  “I doubt it now though like everything.”

History at its Best:  Baime is a master story-teller who appears to have invented a time machine. His carefully crafted narrative transports the reader back in time – starting with Truman’s 1884 birth in a small white house in Lamar, Missouri.  Each sentence is carefully constructed and colorfully packed with details that makes Harry Truman and this period in history come alive. “The Accidental President” reads more like a captivating novel than non-fiction. The book is good history in that it simplifies events without being simple.

Marks of Good Writing:  There are a two marks of good writing, each of which deals with how long a reader takes to absorb a book – but from opposite ends of the spectrum.  First, good writing causes the reader to read slowly and linger over words and sentences just to appreciate the sheer beauty of expression.  Second, good writing propels the reader to rush through the book because it hard to put it down.  “The Accidental President” is good writing at both levels.

5 Sections: In the five sections the book is divided into, the reader is invited to a front row seat to witness not only the monumental events of World War II that dominated Truman’s first four months in office, but to get an inside look into Truman’s mind and character and how this accidental president quickly rose to the occasion to lead the nation and world at a critical moment in history.

Read It:  You won’t be disappointed with reading “The Accidental President: Harry S. Truman and the Four Months That Changed the World.” I highly recommend this book! Thanks to A.J. Baime for this outstanding contribution to our understanding of Harry Truman and the first four months of his presidency.