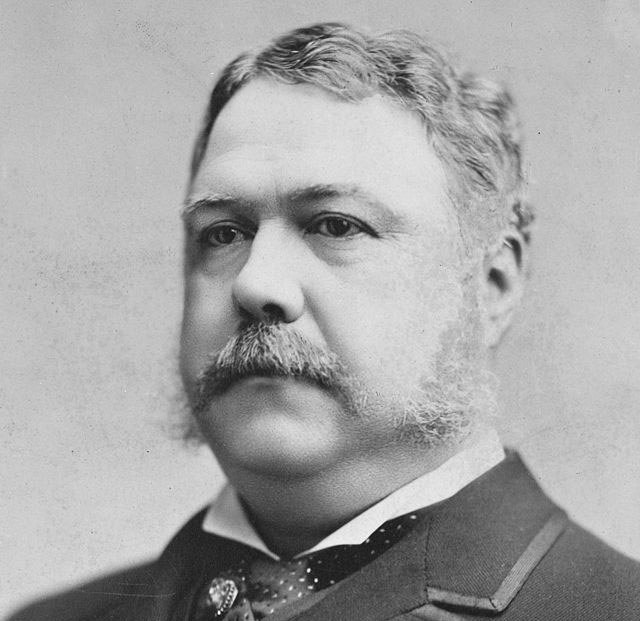 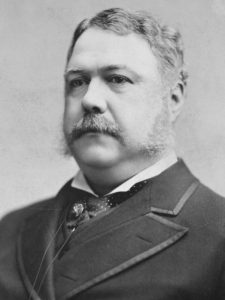 Chester A. Arthur is not one of our better known presidents.  Our 21st president served just less than three and a half years, having ascended to the presidency upon the assassination of James A. Garfield.  He was unsuccessful in winning the Republican nomination for president for a full term of his own in 1884 – partially because he didn’t actively direct his staff to pursue it, perhaps because he knew he was dying of Bright’s Disease.

Bottom of the Performance Barrel:  According to a 2017 survey of almost a hundred historians, Arthur ranks toward the bottom of the list, clocking in as the 35th best president, ahead of the troubled presidencies of Herbert Hoover, Millard Fillmore, William Henry Harrison, John Tyler, Warren G. Harding, Franklin Pierce, Andrew Johnson, and James Buchanan.  Woodrow Wilson once famously quipped that Arthur was “a non-entity with side whiskers.”

New Book Resurrects Arthur’s Reputation:  In a recently published book entitled The Unexpected President: The Life and Times of Chester A. Arthur (New York: Da Capo Press, September 2017) author Scott S. Greenberger attempts to resurrect Arthur’s reputation. The book is well-written, well-researched, and makes the case that Arthur, a Republican political hack who helped run machine politics in New York, pivoted as president to defy the party leaders and do the right thing.

Fears of an Arthur Presidency:  Arthur never wanted to be president.  “God knows I do not want the place I was never elected to,” Arthur told Garfield’s cabinet as the president lay dying in the White House. Arthur wasn’t the only one nervous about him becoming president.  Former president Rutherford B. Hayes, who had fired Arthur from the patronage job of Collector of the Port of New York, confided to his diary his fears that NY political boss and Senator Roscoe Conkling would be “the power behind the throne, superior to the throne!” under an Arthur presidency. Others were equally concerned about such a partisan politician as president.

Civil Service Reformer:  But Arthur turned out to be a surprise as president.  He defied Conkling’s order to fire the Collector of the Port of New York that President Garfield had appointed. Garfield had appointed a man opposed to Conkling’s reign without even consulting the senior NY senator.  When Arthur had held the Collector position, he ignored new civil service laws, continued to squeeze public employees to make financial contributions to the Republican Party as a condition for keeping their jobs, and treated civil service exams as a farce.  But as president, Arthur had an epiphany and supported civil service reform legislation and appointed reform minded men to the newly created Civil Service Commission.  It was not the first time Arthur refused Conkling’s orders.  Conkling had ordered him not to accept the vice-presidential nomination and Arthur bucked him.  What explains why Arthur, whose whole career was tied up in corrupt machine politics, pivoted and began to make decisions that were good for the entire country, not just the party bosses?

The Letters That Shaped Arthur:  After his presidency, Arthur, who was increasingly embarrassed by his years as a political hack, directed aides to burn three large garbage cans full of his personal letters and documents.  Surprisingly, Arthur preserved 23 letters written to him by a New York City woman in her early thirties.  Julia Sand was an unmarried invalid, who took it upon herself to write the Arthur and encourage him to do the right thing. It makes it difficult to write a balanced treatment of a president for whom so many records do not exist, but Mr. Greenberger has done a credible job.

Bringing Out the Best in Arthur:  Julia Sand began writing to Arthur after Garfield was shot but before he died.  Shortly after Arthur became president, she wrote, “You are a better and nobler man than you were a very short time ago.”  She had confidence in his ability to do the right thing and may have been an important influence in shaping his decisions as president.  In one letter she wrote “And now your kindest opponents say: ‘Arthur will try to do right’ – adding gloomily: ‘He won’t succeed, though – making a man President cannot change him.” But she thought otherwise writing that “making a man President can change him.” She consistently appealed to his better nature:

“Rise to the emergency.  Disappoint our fears.  Force the nation to have faith in you.  Show from the first that you have none but the purest aims.  It may be difficult at once to inspire confidence, but persevere. In time – when you have given reason for it – the country will love & trust you.”

As Julia continued writing to Arthur during his presidency, she didn’t hesitate to call him to task for decisions he made that she viewed as wrong.  Intrigued by the letters, Arthur paid a surprise visit to Julia’s New York City home one evening in August 1882 and the two, along with her many relatives there, chatted.

Summary: This book is well worth the read, telling Arthur’s story of growing up, his honorable service during the Civil War, his time as a Republican party hack, and his unexpected presidency.  Mr. Greenberger does a great job of weaving in Julia’s letters into the narrative.

Win a Free Copy:  The publisher, Da Capo Press, has graciously agreed to send one free copy of the book to a lucky winner.  If you’re interested in being eligible for winning the book, here’s how: Send me an email to mike@presidentialhistory.com with the subject line “Chester Arthur Book,” or if you’re a subscriber to this presidential history blog, simply reply to the email with the content of the blog and note that you’d like to be considered for the free book.  I will do a random drawing of one name on Thanksgiving Day (November 23 – coinciding with Julia’s 23 letters to Chester Arthur!) of all emails received expressing an interest in the book.  I will contact the winner for your mailing address and then notify the publisher who will send the lucky winner a copy of the book.  Let me know if you have any questions.