My Encounter with Jimmy Carter 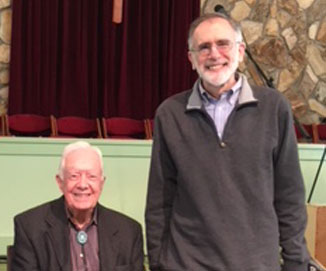 It was 38 degrees when I left my hotel room in Americus, Georgia at 5:15 am.  My destination was the Maranatha Baptist Church in nearby Plains where Jimmy Carter would be teaching a Sunday School class at 10:00 am.  The church’s website informed me that if I arrived by 6:00 am, I would most likely get a seat in the small and generally crowded sanctuary where the former president teaches about three Sundays a month.  October 29, 2017 was one of those Sundays.

My GPS Leads Me Astray:  I wasn’t particularly confident in my GPS that morning, which had inaccurately led me the night before on a small winding, two-lane country road on the way to my hotel.  So for good measure, I also turned on the GPS on my phone.  Shortly after leaving the historic Windsor Hotel, I got the first set of conflicting directions from my two GPS devices – turn left or turn right.  I decided to trust my phone given my 30 minute detour the night before.  It was pitch black and there were no street lights on the country roads.  I missed an instructional turn in the dark as I couldn’t see any road.  I turned around without backing into a ditch, found the road to turn on, and continued listening to my phone’s instructions.  It then proudly announced to me that I had arrived.  The only problem is that I was in the middle of nowhere.  No civilization.  No church. No street lights. Only trees illuminated by my car’s headlights. I was starting to wonder whether I would ever find the church. 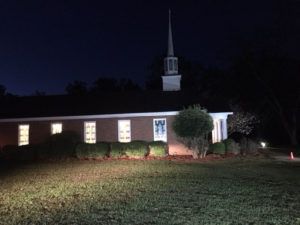 I Finally Arrived:  I turned off and banished my phone’s GPS and began listening to my separate GPS device.  After a few minutes of driving, I saw lights in the distance.  I had arrived.  It was 5:40 am.  I pulled into the church parking lot occupied by a half-dozen or so cars.  A volunteer directed me where to park.  He then came to my window and handed me a slip of paper.  It had the number “12” on it – my place in line.  The line wouldn’t form outside the church for another two hours, and until then I sat in my car with the engine running and the heat on.  One woman I later talked with was very upset that she had received number “45,” equating it with our current and 45th president of whom she was definitely not a fan.  She tried to trade her number but to no avail. The person with number “1” had arrived at 3:45 am!

Entering the Church:  At 7:45 am, people emerged from their cars and found their place in line outside the one story church building.  We went through a security screening by the Secret Service and were admitted to the church sanctuary.  A volunteer inside directed people to fill the rows in the middle section starting in the first row.  I eventually ended up in the third row right aisle seat (up from the sixth row because they needed a thin person not with anyone else to fill in a gap so they could pack more people in),  I was now less than ten feet from the movable podium from where Carter would teach.  It was probably around 8:15 am.

Mandatory Orientation Meeting:   At 9:00 am, a volunteer from the church began the mandatory orientation for visitors wanting to listen to President Carter teach.  We could only take pictures of Carter when he first came in the sanctuary at 10:00 am and greeted the congregation; no leaving the sanctuary before the class started (except for using restrooms – dismissed by row); the process for having pictures taken with Jimmy and Rosalyn after the 11:00 am worship service; no shaking hands with the Carters; no giving them anything, etc.

Carter Arrives and Greets the Congregation:  At 10:00 am, the former president entered the sanctuary from the right hand door at the front of the sanctuary, accompanied by Secret Service agents.  He looked great for being 93 years old.  He has been ex-president now for longer than any other previous occupant of the Oval Office – almost 36 years, with his closest competitor being Herbert Hoover who lived for 31 years after his presidency.  Carter warmly greeted the congregation, most of whom were visitors.  The church has a membership of about 25-30 members, and the sanctuary probably held a couple hundred people total.  He went by section asking what state or country people were from. Once a state or country was mentioned by one person (and Carter would repeat what he heard), the rules were that no one else could yell out their home state or country.  There were people from all over the country and world. 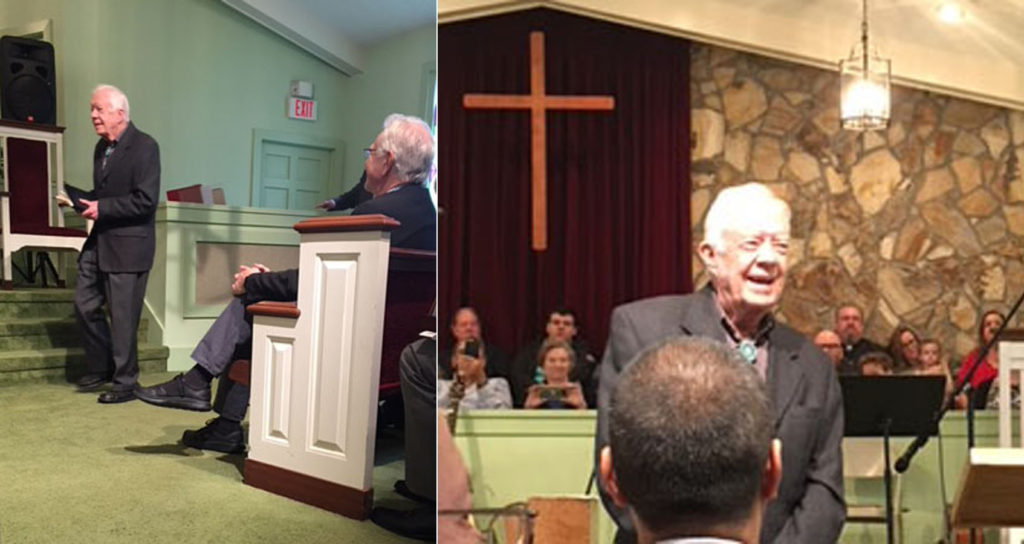 Sunday School Lesson:  Carter proceeded to talk for 45 minutes without notes, ostensibly teaching from a passage in the New Testament book of Galatians, but it was a wide ranging discourse on a variety of topics dealing with current events and a basic message about Christianity.  He was articulate, passionate, and gracious. He stood in the middle of the center section for much of the time but also walked back and forth up front as he spoke when he wasn’t at the podium.  When his time was up, he collected his one page of notes from the podium, stating that he had notes but hadn’t remembered to use them. Applause was prohibited as he finished and left the room.

Worship Service:  A few minutes before 11:00 am, the former president appeared again and greeted some people he knew in the front of the right hand section.  He then sat down in the right hand section, third row, left aisle seat, meaning he was directly opposite the aisle from where I was seated – just three or four feet away!  I tried not to turn my head and stare, but did periodically glance off to my right.  Before the service began, I noticed he had his Bible open and was reading from it.

Getting My Picture Taken with the Carters:  After the 23 year-old pastor finished his sermon and the service ended, Jimmy and Rosalyn sat on stools at the front of the sanctuary and the efficient process of having pictures taken with them proceeded.  We were instructed to hand the volunteer our camera or cell phone all set and ready for a picture.  We were told it was acceptable to say something very brief to them (like “Thanks for the Sunday School message”) but it appears most people did not say anything to them.  I decided to say something.  When my turn came, I approached the Carters and said to the former president: “Thanks be to God for your integrity and heart of service.” He smiled and seemed to acknowledge he had heard me, and I think Mrs. Carter may have said something in response to my comment, but it all happened with lightning speed.  I quickly turned around to have my picture snapped,  Before I moved off to the side to retrieve my camera that had been handed off to another volunteer, I faced both of them and said “Blessings to you.” Mrs. Carter, in particular, seemed to acknowledge my comment.

Good Pictures:  Before exiting the sanctuary, I quickly checked the pictures on my phone: two of my back as I approached the Carters, one as I was turning around, and two of me standing next to the former president, with smiles on our faces. I never shook his hand and he didn’t say anything to me, but I did stand next to a former president – a first for me – and have my picture taken with him.