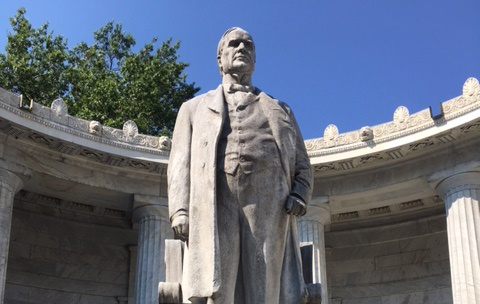 Ohio boasts it is to home eight presidents. Seven were born in the Buckeye state and one adopted Ohio as his home. But starting with Ulysses S. Grant’s birth in 1822, all the presidential birthplaces have been lost to history in varying degrees, except for the Cincinnati home where William Howard Taft was born in 1857.

Grant’s ‘mobile’ home: In Point Pleasant, Ohio, where Grant was born, there is a home on the foundation of the original Grant family home where Grant was born. But the building has a storied history. It was disassembled and reassembled at least twice to go on display in Columbus and Cincinnati and across the country after Grant’s death in 1885. It is clear that parts of the existing building are not original. Perhaps some components are original but record keeping doesn’t give us a clear picture. For example, based on the earliest known photograph of the house, it appears the ceiling was much lower than it is today.

Hayes and BP gas station: Rutherford Hayes, also born in 1822, has only a stone marker at the edge of a BP gas station in Delaware, Ohio to mark the place where he was born.

Garfield’s log cabin replica: In Moreland Hills, Ohio is a replica of a log cabin similar to the structure in which James Garfield would have been born in 1831. But the original home is long gone.

Taft’s original home stands: Only William Howard Taft’s original birthplace home still stands in Cincinnati where he was born in 1857. Over the years, the home had many owners and it was subdivided and used as an apartment building at one point. It is currently operated as a museum by the National Park Service.

History is lost so quickly and some presidents, especially those from humble origins, often do not have their birthplace homes preserved.