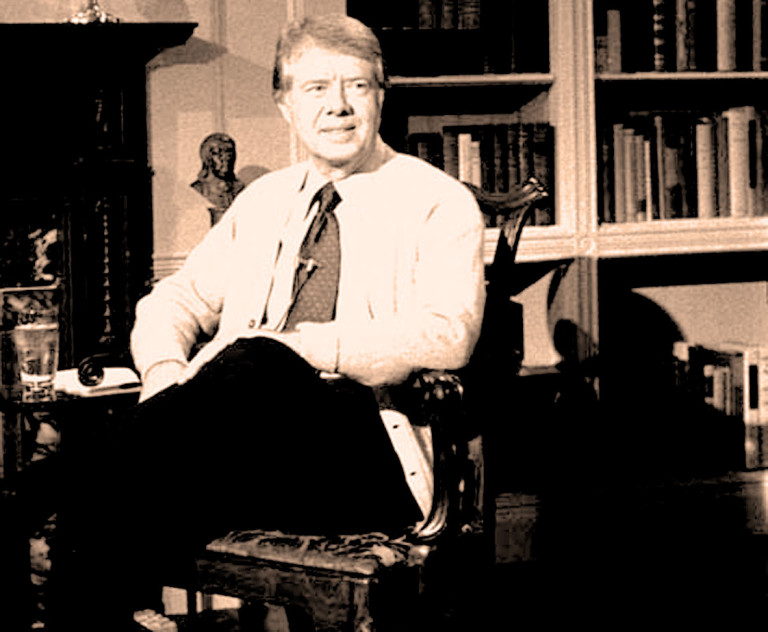 Jimmy Carter’s smile, confidence, intelligence, and determination paved his unlikely path to the Oval Office in 1976. But once in office, he was hampered by another core feature of his personality: his engineering mindset. He approached issues as technical problems to be solved (an admirable trait), but without being willing to play the all-critical game of politics. Carter’s wife, Rosalyn, once noted that her husband disliked the “pettiness of politics.”

Definitive Book on Carter’s Presidency: President Carter: The White House Years by Carter’s domestic policy advisory Stuart E. Eizenstat, will stand for years as the definitive political, intellectual, and personal history of the Carter presidency. The book offers a front row seat to the complexities of governing, confronting crises, and dealing with personalities. Eizenstat worked for Carter when he was governor of Georgia and was instrumental in laying the framework for Carter’s upstart and unlikely bid for the presidency. Eizenstat argues that Carter “was not a great president, but he was a good and productive one.” The book provides many details, often drawn from the copious notes Eizenstat would regularly jot in mee 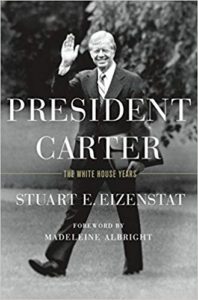 tings, and is a well-written but lengthy narrative, weighing in at back-breaking 1,024 pages. Despite being a Carter loyalist, Eizenstat offers an honest critique of the shortcomings of his boss and the Carter presidency, while also arguing that Carter’s legacy has sometimes been obscured by missteps. “Far from a failed presidency,” Eizenstat writes, “he left behind concrete reforms and long-lasting benefits to the people of the United States as well as the international order.”

1976 Campaign: One of the most engaging sections of the book is the story of the 1976 campaign. Today, we think nothing of presidential candidates announcing their intention to run some two years before election day. But when the little known Georgia governor (“Jimmy who?”) announced his candidacy on December 12, 1974, it was unusual. Carter’s strategy was to surprise the political pundits with a win in the Iowa caucuses, at a time when the New Hampshire primary was viewed as the real starting point of campaigning. Over the course of 1975, Carter made 110 trips to Iowa. When the caucus votes were tabulated on January 19, 1976, Carter made news and picked up momentum with his 27% win, even though 60% were undecided.

No Chief of Staff: One of Carter’s failings as president related to both his personality and how he structured the staff at the White House, and these were interrelated. Carter’s intellectual rigor was one of his major strengths that turned into a major weakness. He believed that he was smarter than anyone else and didn’t need others. As a result, he would bury himself in reading and understanding every detail, while neglecting broader strategic aims. For the first two years of his presidency, Carter operated without a chief of staff, believing it was unnecessary.  It was a surprising error for someone who usually understood history well. Even a quick survey of how other presidents had dealt with the management of information and access would have led him to see the necessity of a chief of staff. It took him two years to realize he needed one, but by then he had lost critical momentum.

Outsider on the Inside: Carter campaigned as an outsider who could be trusted to be honest after Nixon’s presidency. But once he won the presidency, he was the ultimate insider, the most powerful man in the world. But he never viewed himself that way. He never embraced Washington’s culture or developed the necessary political relationships. He continued to operate as president as he had as a candidate – as an outsider. This attitude severely hampered his ability to be effective and to forge compromises and move issues forward he cared about. He viewed the presidency as more of a solitary function centered on him and his intelligence. Eizenstat writes that “as the only person in Washington who has been sent by the electorate nationwide, the president has the responsibility to adjudicate among conflicting interests,” a task Carter failed to embrace.

Tense Congressional Relationships: Carter’s relationships with Congress were not warm and cordial for three main reasons. First, he felt he knew best and didn’t consult with Congress on many policy issues and legislative proposals. He believed they should simply implement his policies because they were the correct ones. “Members of Congress,” Eizenstat writes, “may forgive a president proposing something they oppose, but not embarrassing them by making them appear without influence to the people who elected them.”  Second, he overwhelmed Congress with too many initiatives that were not prioritized, something with which the slow moving institution had troubling grappling. And third, with his discomfort with politics, Carter unwilling to engage in horsetrading. It was “anathema to Jimmy Carter, who felt if he made the right decisions for the country, the public and Congress would follow.” In this he differed from many of his predecessors, notably Lyndon Johnson, who relished and excelled in the art of political persuasion. Carter was a “cerebral Southern moderate who neither honed these social and political skills in Georgia nor enjoyed them in Washington,” Eizenstat writes.

Rigid Moralist: Carter’s fatal flaw as president is that he was a rigid moralist like Woodrow Wilson who lacked political sensitivities. His blindness to the rough and tumble of politics was driven by the nuclear engineer he was. And like another engineer president, Herbert Hoover, Carter was not comfortable with the give and take of politics, viewing instead the problems of the nation and world as issues that had logical solutions that he could discern through the use of his considerable brain power. He smugly and self-righteously viewed his failure to bend to interest groups and political reality as a badge of honor. “He took on established interests oblivious of the political costs and often in ways that were politically maladroit,” Eizenstat writes. With his expansive but non-prioritized agenda, he often “frittered away precious political capital on” marginal issues.

Policy Issues: With painstaking detail and explanation, the bulk of the book is centered around six key policy issues confronting the Carter presidency. The book also examines what went wrong with the Carter presidency and his unsuccessful campaign for reelection in 1980.

Memo to 2020 Presidential Candidates: As I read the book, it occurred to me that all candidates for president should be required to read the book. Some of Carter’s problems stemmed from not having a big enough strategic picture. In other words, campaigning for president is one thing and requires a certain set of skills to both win the nomination and general election. Campaigning is largely a solo activity where candidates control the agenda and are accountable only to themselves. But the transition period after the election and actual presidency come quickly. The newly elected president must shift gears and work with a vast bureaucracy and competing constituencies in order to be successful at implementing what was promised so easily on the campaign trail. A candidate needs to understand not only how they will campaign, but how they will govern. All this needs to be planned out ahead of time. Carter is certainly not the only president who struggled with the hard and complicated work of governing once they were elected.