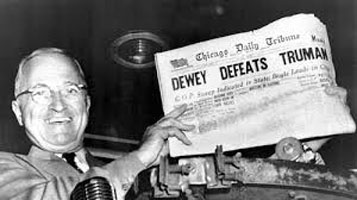 In 1948, President Harry S Truman defied all odds in winning a term as president in his own right with his shocking upset victory over New York Governor Thomas E. Dewey. No one, pollsters, pundits, or the people expected Truman to win. No one, except Truman himself.

Book on 1948 Campaign: How Truman carried off this stunning victory is expertly chronicled in A.J. Baime’s captivating 2020 book, Dewey Defeats Truman: The 1948 Election and the Battle for America’s Soul. Baime is the consummate story-teller and this is a book you won’t be able to put down. Expertly researched and beautifully written, it tells the story of America in the post World War II years and the splintering of the electorate. Besides Truman and Dewey, the white supremacy Dixiecrat third party led by South Carolina Governor Strom Thurmond and the ultra liberal Progressive Party led by former vice president, Henry Wallace created fresh uncertainty into the electoral results.

How Truman Won: Truman embarked on multiple whistle-stop train trips across the nation, stopping at small towns and big cities to speak bluntly to the American people about the risks of Republican rule. Thousands turned out to hear Truman speak from the back of the presidential train, the Ferdinand Magellan. Truman exhausted his staff and family, none of whom thought he had a chance to win. Pollsters stopped taking polls saying Dewey was as good as elected. Most newspapers across the country derided Truman as hapless and endorsed Dewey for president. And, of course, the Chicago Daily Tribune, jumped the gun and published its famous “Dewey Defeats Truman” headline. Truman was delighted to get hold of a copy of the paper after his win and held it up with a big grin on his face.

Born in a Whistle-Stop: I was actually born in one of the whistle-stops from the campaign, although not until 1954. But my Dad told me that even six years after Truman’s whistle-stop at the small farming community of Akron, Colorado, the locals there were still talking about the president’s stop there from a half-dozen years earlier. Truman’s blunt and plain speech resonated with the people who turned out for him on election day.

A Must Read Book: A.J. Baime’s book on the 1948 election is a classic and a must read for anyone interested in presidential history and campaigns.